I finally decided that Apple was missing to my culture and that it needed to be fixed.

What is a hackintosh?

In short, a hackintosh is a regular PC on which you install Mac OS X. The challenge is that not all hardware is supported, so there is some research to do ahead. You do not want to pay for a fancy graphics card that doesn't work with the OS.

The "it just works" concept did not appeal to me very much. The main idea was to learn, and there is no better way for that than doing it yourself. (To be honest, the price of Apple's hardware helped me make that decision as well.)

Add that I enjoy doing the research and learning about all the new hardware finesses since the last time I built a computer (2005), plus that I appreciate to tackle a challenge.

My old computer was getting crippled and too loud to my taste. These are just further excuses for having fun building a new computer.

As for many decisions people make, I think that my guts just decided to do it, then found or invented seemingly rational reasons.

Luckily, there are amazing resources on the internet for building hackintoshes. The best I have found is tonymacx86. This site has even a shopping list page listing hardware verified to work fully. This was my starting point, the motherboard I selected is from that list, as well as the processor.

I hate loud computers. The last time I built one I spent quite some time on silentpcreview, a heaven for noise-aware computer builders.

Choosing parts involved the following requirements:
Finally I added one more constraint:
My previous rig had a nice sound card, I noticed only too late that it had no driver for linux. If installing Mac OS X failed, I'd always have linux as a backup plan. Paying the sum required for windows was not an option, given that I don't feel a big need to widen my microsoft related culture.

Here is what I ended up with:

Intel Core i5-2500K @ 3.30 GHz. I decided I did not have the budget or the need for an i7. This also gives me the possibility to overclock in the future. 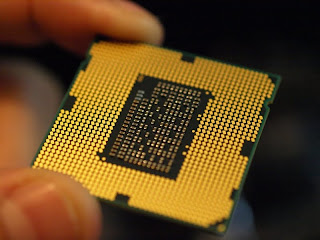 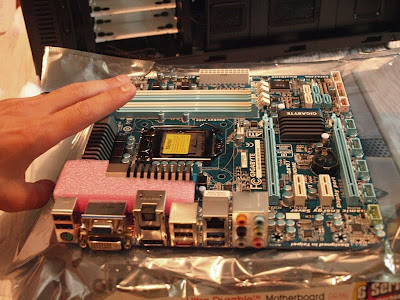 It feels now that I could have used more time reading about the chipset options. I decided that I did not need internal connectors for USB3, since I selected a case that did not have USB3 connectors.

This is one of the motherboards in tonymacx86's recommended builds with Sandy Bridge. 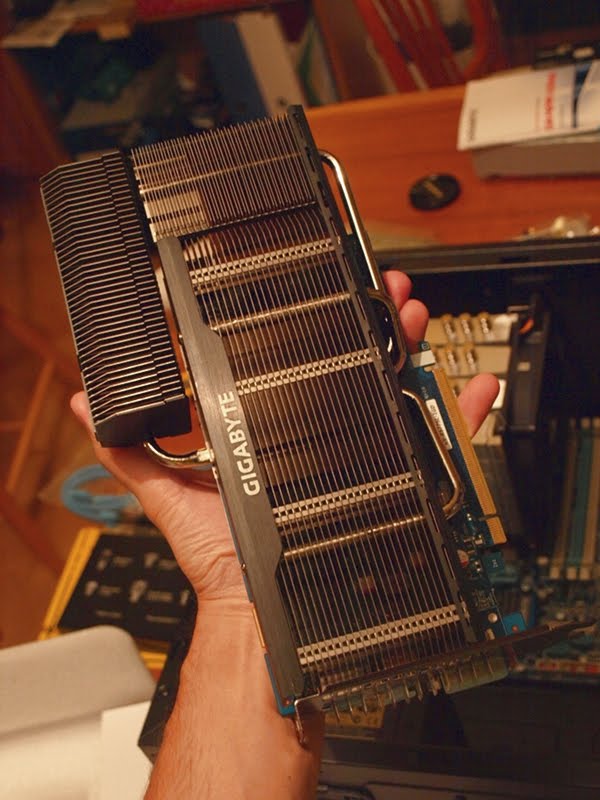 This thing is enormous, so it influenced the choice of a case.

At least some Mac Pros have an HD5770, so I figured this would be a good choice for a hackintosh. Given that I wanted passive cooling, the choice was dramatically reduced. I took that as a blessing.

Seasonic X-560.
Silentpcreview's editor's choice, you can't go wrong with that. The PSU was the major source of noise in my old computer. This one turns off its fan when it does not need it. 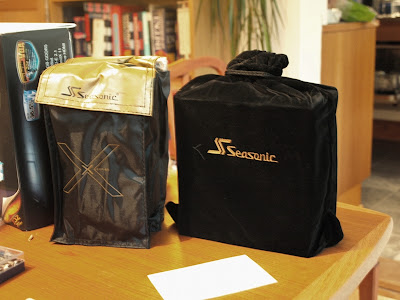 The packaging is ridiculous. A velvet pouch, and a bag in strong impregnated fabrics with gold colored paint containing the cables. I suppose that Seasonic's marketing department wanted to increase the premium feeling of the PSU, but I just felt sad about the unnecessary resources used for packaging I'll never look at. Perhaps the resource cost is negligible compared to that used for the PSU itself, but I dislike the principle.

I expect the PSU fan to be off most of the time anyway. 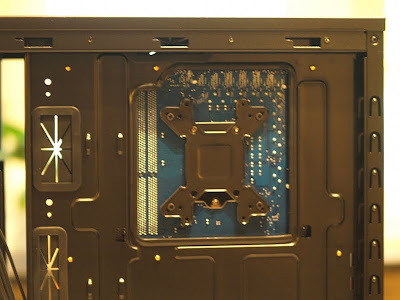 Installing big heatsinks has become easier with access to the back side of the motherboard. 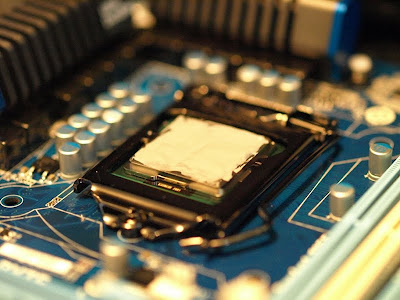 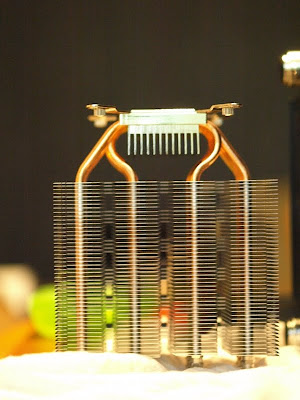 The Scythe mugen 3
This is also big. I actually purchased a Mugen 2, I got a bit nervous about receiving a Mugen 3 (version upgrade does not always mean better performance). A quick search showed that the performance was very similar. 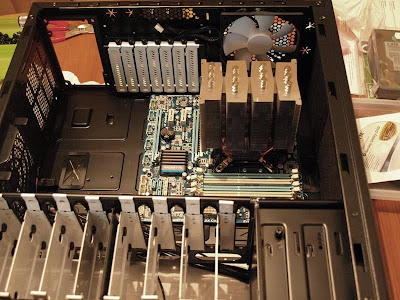 In place in the case, before installing the fan. 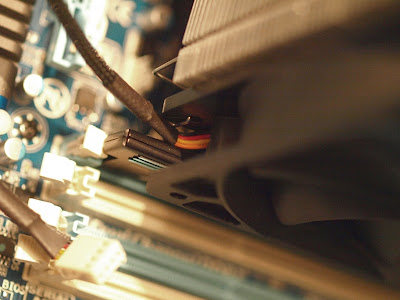 The installation is tight, the fan cable touches the RAM. I ended up rotating the fan 90 degrees.

SSD of course! OCZ Agility 3 Series SATA III 2.5" SSD 120GB.
I nearly bought another brand but checked max read and write speeds at the last second. There seem to be big variations across the brands, make sure to compare thoroughly before you buy one.

A random blue-ray reader and DVD-burner. It turns out that Mac OS X does not support blue-ray out of the box, something I failed to check.

Fractal Design Define R3.
I was recommended this box on the silentpcreview forum, and I was amazed at its low price. It is also stylish, although it's blue LED is a bit intrusive.

Most importantly, it is big enough to accomodate for the Mugen CPU cooler and the big fanless graphics card. 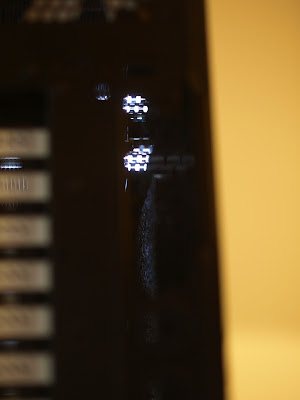 The top of the CPU cooler's heatpipes, in the closed case.
The heatpipes reach almost all the way to the cover. Shot taken through a backside venting hole. 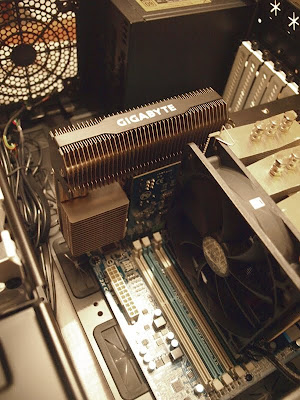 Inside the case with the CPU cooler (lower right), the graphics card (where it says Gigabyte). In the back, a bottom venting hole and the PSU.
It looks like the CPU cooler and the heat sink of the graphics card take almost the whole width of the case. With my current fan configuration (bottom of the front panel, top of the back panel), nearly the whole airflow should go through both coolers, and there is not much room for the air to pass by on the side of them.

Once mounted (it took a while, with all the photo sessions), I was surprised and a little proud to see the computer boot to BIOS at once!

While the noise level is very low, I would not call this a silent PC, but definitely quiet. The case fans are the default Fractal Design, and the CPU fan is what came with the Mugen. I might to do some research for replacement in the future, Noctua seems to have interesting alternatives.
I am very happy with the noise level overall, it sounds less than a standard laptop.

I cannot say much yet, but the cores are at about 32°C while I am surfing. Playing half-life 2 at max settings increases the temperatures by about 10°C. It is an old game, so I do not think this shows much, I will have to write a new post if I find the interest in benchmarking.

Grand total of 9394 SEK (1433 USD, 1030 EUR, according to Google's currency converter). Note that I do not count the hours of research, the hassle of building, installing the OS... These would add up to an obscene amount.

For reference, here is a link to apple's site, featuring the price of their Quad-Core Mac Pro: 2.8 GHz, 3 GB RAM, 1 TB Hard drive, a similar graphics card as mine.

Finally, a picture of the whole finished system: 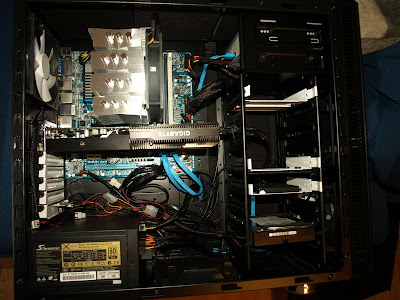